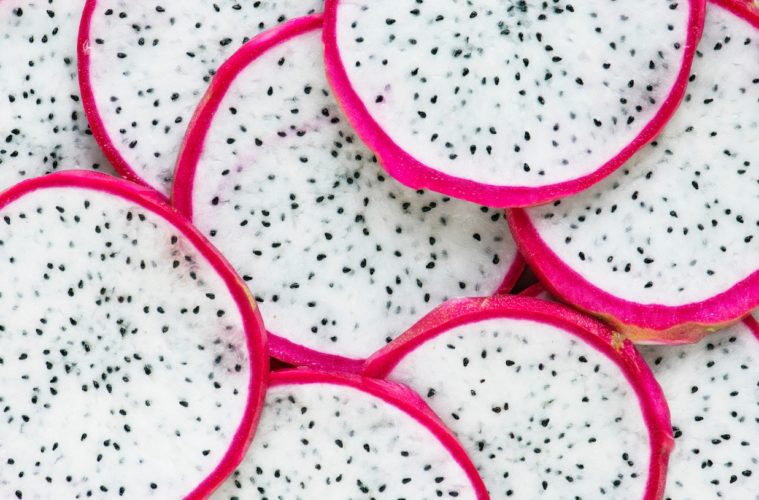 Fruit lovers, BEWARE, as your taste buds will need time to process this: Thai fruits will leave you in awe. We made a rather comprehensive list. Raw, in juices or in meals and desserts, doesn’t matter: go and explore these exotic tastes of thai fruits! 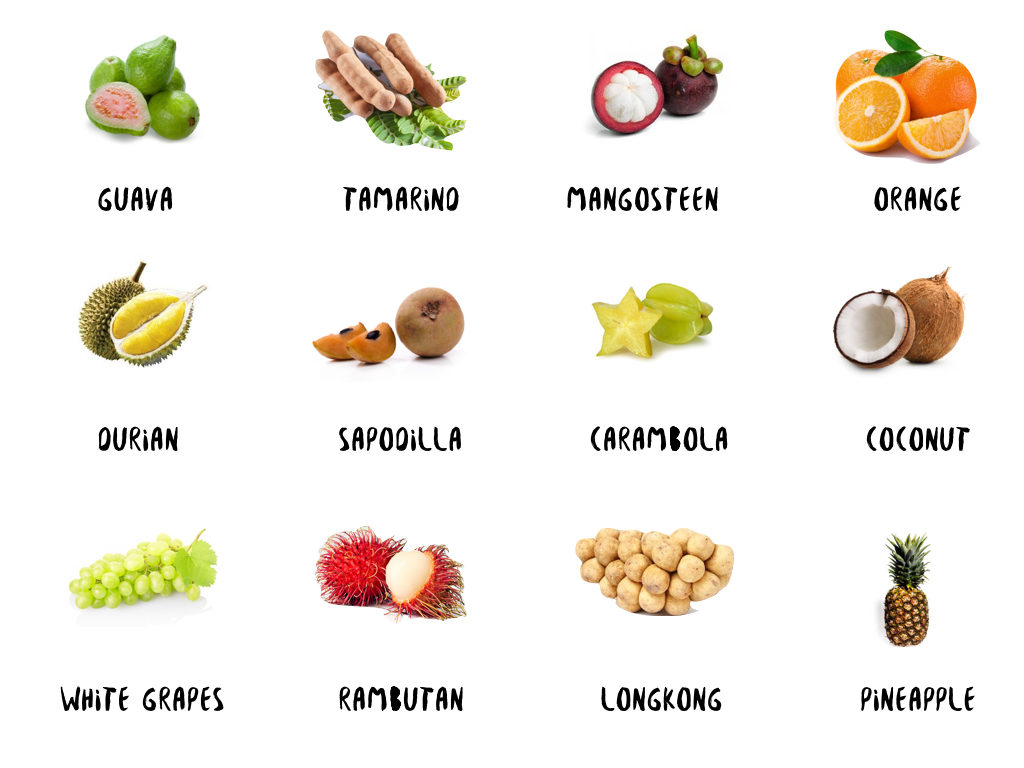 The word “Farang” in Thai means foreigner and this alone tells you that this is not a native fruit. In fact it comes from the Americas. Very crunchy and best served with a seasoning consisting of salt, sugar and crushed chili or a dip prepared with fish sauce and palm sugar, guava is a staple snacking fruit that is shared among friends and colleagues at any time of the day.

Used mostly as a flavor enhancer and for sauces, the fruit of the tamarind tree grows in a long brown pod. Its flesh is sour, sweet and fruity at the same time. Many Thai dishes include tamarind as a base ingredient.

If durian is the king of Thai fruits, then mangosteen is the queen. Underneath its tough purplish outer shell is a brilliantly white flesh segmented into 5 or 6 adjoining pieces. Inside each piece lays a single seed that is surrounded by a deliciously sweet jelly-like pulp.

Thailand is blessed with year round availability of the fresh Thai oranges. Greenish yellow in exterior, underneath reveals a sweet orange fruit that is eaten raw or enjoyed in a freshly-squeezed juice form.

The “King of Thai fruit” is a must-try for anyone visiting Thailand. Its creamy yellow flesh reveals a taste that is one-of-a kind. Sweet-to-taste, durian is best known for its smell and after taste. Comparisons to sweet garlic in terms of aroma and after taste are common. Thais prefer a durian that is just ripe and still slightly firm to the touch.

Oval in shape, sapodilla is yellow-brown in appearance when ripe, yielding a flesh that is somewhat firm in texture and has a fragrant honey-flavored taste. As the fruit ripens, it becomes even more sweet and juicy.

A fruit native to Southeast Asia but not Thailand caramboma is however grown here. With a star-shaped cross-section, it sports a juicy yet crisp flesh that is mostly sweet with a hint of sourness.

Available all year around, young coconuts are revered for their sweet milk and tender flesh. Although Thailand has several varieties of coconut, it is the young coconut that is most sought after. Nothing is more refreshing than a chilled glass of its juice.

Grapes are grown throughout Thailand and the country has many varieties from which to choose. Mostly eaten raw, grapes are finding their way onto menus of fusion restaurants and as an essential ingredient of chefs looking for a fruit-flavored sweetener.

Ruby red and covered with fine green-tipped hairs, the rambutan is most delicious when eaten at the peak of ripeness between May and September when it is most plentiful. Two varieties of Thai rambutan are available and both are noted for their sweetness. Once the outer skin is peeled away, a delicious fruit with one large seed is revealed.

A seasonal fruit harvested from June to august, the arrival of the longkong is anticipated by Thais countrywide. Underneath its crispy skin is a white flesh with a texture and taste similar to lychee. Best eaten at room temperature, it is not uncommon to see Thais eating canned versions of it throughout the year when the fresh fruit is not available.

There are four varieties of pineapple grown in Thailand that range from very sweet and tender to less sweet and firm. The variety known as Sri Racha is favorite to eat raw because of its sweetness and aroma.

Renowned globally, Thai watermelon is a staple of every home and restaurant. Many different varieties abound but all share similar traits – deliciously sweet and refreshing.

Jujube is oval shaped and green or red in color. As it ripens its outer peel turns into a light golden shade. One bite into it reveals a crisp, crunchy texture and slightly sour taste that is pleasantly offset by dipping it into a dry salt and granulated sugar dip seasoned with crushed chili.

Found throughout Thailand and across Southeast Asia, rose apple is a juice fruit with a texture not unlike a pear. Whitish green in color and generally between 5-10 cm long, the fruit has a delicate taste with hints of rose water.

A native fruit to Thailand and Southeast Asia, pomelo is most often referred to as an Asian grapefruit because of the texture and shape of its flesh but is much larger in size. However, Thai pomelo is much milder in flavor compared to Western grapefruit and is enjoyed raw, without the need for condiments such as sugar.

From June to September, custard apples are found on the streets and in markets throughout Thailand. When mature the fruit is soft and easily split into two halves with your hands. Inside a very sweet creamy white flesh is easily spooned out and enjoyed.

Many varieties of banana are found throughout Thailand from large to very small. Unlike those found in the west, Thai varieties are extremely flavorful and aromatic.

Mangoes are a fruit that most Thais prefer to eat while still green, dipping them into a mixture of salt, sugar and ground chili powder. However, one exception to this rule is mango and sticky rice, when fully ripened mangoes are eaten with sticky rice and sweetened coconut milk. Although not as famous as durian and mangosteen, Thais have a special place in their hearts for finding the perfect mango.

One of the largest fruits found in Thailand, jackfruit has a firm texture and is delightfully fruity in taste. Underneath its green-grayish skin rows of jackfruit pods are yellow in color and very delicious. With an aroma nearly as strong as the durian, that’s where the similarities end as the jackfruits smell is like a fruity perfume.

With its reddish-brown scaly skin and about the size of a fig, zalacca is peeled by pinching the tip and peeling off the skin. Underneath, a fruit consisting of three lobes is revealed each with an inedible seed. Zalacca is sweet and acid in flavor with a dry crumbly apple like texture.

Although originally from China, the Thai lychee is a sweeter, juicier version of the same family. Round in shape featuring a brownish outer skin that easily peels away, inside is a ping-pong ball size fruit around a single seed. Refreshing and flavorful, Thai lychees are enjoyed by everyone locally and are renowned worldwide by fruit lovers.

Papaya grows all over Thailand throughout the year. Like many other fruits, Thais like to consume papaya unripened most of the time. In fact, green papaya is found shredded in a famous spicy and sour Thai salad called Som Tam. In its ripened form papaya exterior turns bright yellow while the inside flesh turns dark orange and is very sweet and consumed in cut up chunks.