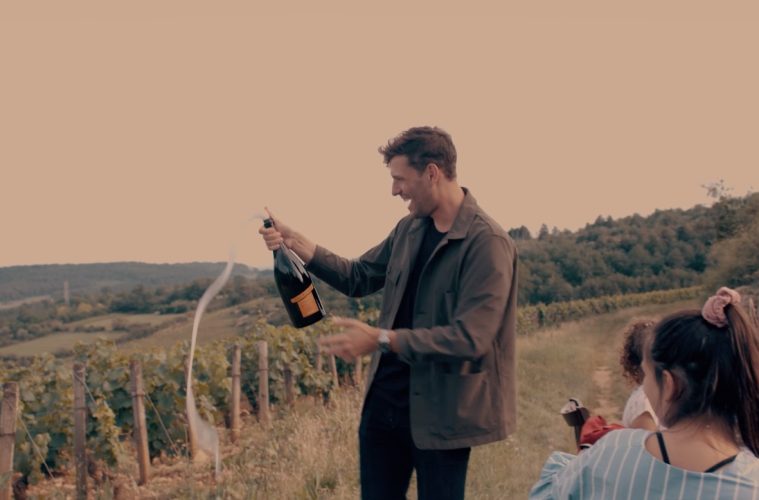 It is time… Time to leave the C-word behind us and rediscover that which I’ve missed most: traveling!  I will be journeying through France to rediscover my old love – wine regions. And, luckily for me, true love never fades. With ants in my pants, I jump into the car and head straight for Bourgogne-Franche-Comté. It’s a 6-hour drive from Brussels (just 3 from Paris) straight into Dijon, the heart of beautiful Bourgogne. And upon my arrival, I discover an envelope waiting for me.

“Dear Jens, welcome to Bourgogne-Franche-Comté. Your visit will consist of an unexpected chain of events, and we truly hope you are ready for it!

“The first is all about gastronomy. Tomorrow evening, you must organise a dinner in the vineyards of Pauline, a young winemaker and the host of La Table de Pauline. Do not come empty handed! Instead, discover the versatile products that our region has to offer and bring as many as you can find.” Challenge accepted!

After a bit of research, I decide to organise a traditional evening of French cheese & wine, set against the beautiful backdrop of the vineyards under sunset. Baguettes, cheese, wine… et voilà!

Now, I need to find the best producers from which to source these delicacies. With plenty of choice in the region, I decide to go for:

A magnum of Domaine Louis Picamelot will have to do the trick! The famous producer of Crémant de Bourgogne is a simply fantastic choice if you seek an aperitif that is complex yet exciting enough to kick off the night. In France, the moment before dinner is every bit as important as dinner itself – so I can’t let my guests down! Also, did you know that Crémant de Bourgogne is made using the Méthode Traditionnelle? This means it is made like Champagne, yet often can be picked up for a better price. You can thank me later for the tip!

To give proceedings a bit of a kick, I make a visit to Cassisium to acquire their famed crème de cassis, a typical regional low alcohol sweet liquor often used as a base for making aperitif cocktails. The small, ripe berries are pressed, alcohol is added to stop fermentation, and you are left with a wonderfully sweet syrup. If you add crème de cassis to your Crémant de Bourgogne, you create what’s called a Kir Royale. This doesn’t only sound royal – it tastes it, too!

From there, I head to Fromagerie Gaugry for some Epoisses, a soft and creamy cheese that has been produced for centuries in the Bourgogne region. If the French have been eating this for centuries, it certainly must make an appearance at my dinner!

With no time to lose and midday already past, I’m off to the Jura – because there’s no way I can organise a cheese & wine dinner without bringing my most favourite cheese in the world: Comté!

I make a stop at La Maison du Comté and select a particularly fine 24-month aged Comté. Then, the only thing left on my grocery list is the vin jaune. I choose to head to Château Bethanie to pick up a divine Vin jaune, a highly specific wine aged in wooden barrels under a film of yeast. This brings the wine a uniquely complex taste, which pairs marvellously with cheeses.

Back to Bourgogne to set the table before our guests arrive! We drive to the top of Pauline’s vineyard in Domaine Charles Père et Fille, where a fantastic view of the valleys greets us. There’s just enough time to chill the wines and assemble the cheese platters before sitting down together – just in time for sunset. Mission accomplished!

A new day arises, a new challenge falls into my hands!

“Go and discover as much of the heritage that Bourgogne-Franche-Comté has to offer. You have just one day. Good luck!”

I take a quick glimpse at the map and realise there are no less than 8 UNESCO world heritage sites in this region, not to mention countless more historic buildings and sites of note. Ignoring thoughts that this may simply be an impossible mission, I conclude to visit the following:

Clos de Vougeot (Clos Vougeot for short) is the HQ of the Climats de Bourgogne. Now, I’m not talking about the weather – rather, the small plots of land that together create a massive vineyard stretching all the way from Dijon to Santenay.

A UNESCO site since 2015, these Climats are individual, precisely defined parcels of vineyard that each bear unique geological characteristics such as soil levels and sun exposure. Naturally, the wines produced in this area each possess tastes specific to the exact Climat in which their grapes were grown.

Do names such as Chassagne, Puligny and Montrachet ring a bell? Well, each of those fantastic wines came from grapes grown here in these famous Climats. Now, by no means are wines from the Climats necessarily better than those made in other appellations across the Bourgogne – yet they do pose refreshing, different potential.

In the heart of these Climats, you will discover the Clos Vougeot. This 12th century wine farm was originally built by monks to provide wines for the nearby Abbey of Cîteaux. The wines became so famous that the farm became multinational. You can picture the castle, with its droves of visitors, as the Apple Store of the 16th century! Yet even though this château has been impeccably preserved, no more wine is produced here.

Next, we drive to Arbois in the Jura, once home of Louis Pasteur, who discovered that microbes were responsible for spoiling food and wine. God bless his contribution to science!

Pasteur found that heating wine to 55°c killed bacteria and stopped wine from spoiling without affecting the taste – the process that we know today as pasteurisation. This understandably sparked a revolution in the wine industry, and from that point wines began to look far more like the wines we enjoy today.

With the day passing fast, we decide to head back to Beaune and visit the Hospice de Beaune, a 15th century hospital for the poor that stands today as one of the finest examples of Burgundian architecture.

Thanks to the many donations by grateful families and generous benefactors from farming, property, woodland, vineyards and the arts, this hospital became an iconic feature of the region.

Today, it is most famous for its charity auction that takes place annually on the third Sunday of November, when the Domaine des Hospices de Beaune auctions off its wines as a non-profit organisation. The Domaine owns 61 hectares (150 acres) of donated vineyards, much of it classified Grand or Premier Cru, and I can only imagine some of the delights that bidders pick up during this esteemed event!

While I greatly failed this challenge, with simply not enough hours in the day to fully experience the wonders of this region, I learned a lot and gained many memories that I will carry fondly.